Joe Alexander, better known as "Rasta Joe" because of his unique Jamaican style pork and chicken, has been barbequing for over 30 years. In 1993 Joe turned his passion for barbequing into a National Award Winning business. Considered by many to be one of this country's top BBQ chefs, Rasta Joe continues to win National Rib Cook-Off competitions from Coast to Coast. In fact, winning awards at America's most prestigious BBQ competition, held at John Ascuaga's Nugget Casino in Sparks Nevada, is nothing new for Rasta Joe. This Rib Cook-Off is held every year over Labor Day weekend and plays host to 24 invited rib cookers and over half a million spectators. The Food Channel's recent coverage of this spectacular event was a new and exciting experience for Rasta Joe.

The TV feature aired several times giving viewers the opportunity to see Rasta Joe hard at work preparing his competition ribs for the Judges, and ultimately his appearance center stage accepting a well deserved Award Winning Trophy! As Rasta Joe says, "It doesn't get any better than this in the World of BBQ competition."

The accoloades and prize money started rolling in after Rasta Joe perfected his "Jamaican Style" sauce recipe. The recipe's history includes 5 trips to the caribbean, where Joe discovered that blending local spices and flavorings, including "JAMAICAN RUM," livened up his special barbeque sauce even more!

Rasta Joe's BBQ, Inc. is based out of Joe's hometown in Plymouth, IN. Along with his profitable competitive cooking, Rasta Joe also takes his Southern Pride 700 Cooker on the traditional summer festival and fund-raising circuit, where he offers a variety of delicious barbeque selections.

Rasta Joe's BBQ Sauce is currently sold at the retail level around the country in Park-N-Shops, Martin's, Kroger's, Meijers, Woodman's, and Felspauch Supermarkets, as well as some convenience stores. But now YOU can purchase Rasta Joe's BBQ Sauce at his wholesale prices right here on the Internet! 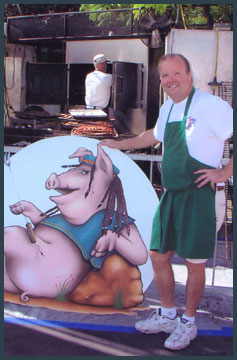 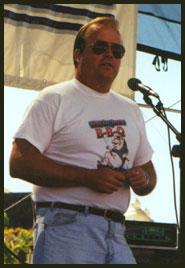 Rasta Joe takes center stage to thank the judges for voting his BBQ Sauce #1 at the Best In The West Nugget Rib Cook-Off, the most prestigious BBQ competition in America! 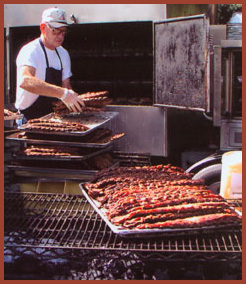 Loading the Southern Pride 700 with ribs freshly dusted with "Rasta Joe's Dry Rub" is a labor of love for members of Rasta's Cooking Team!